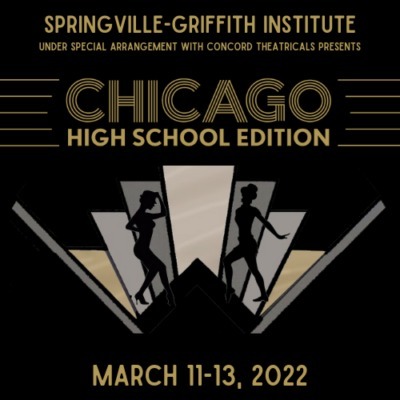 The Springville-Griffith Institute High School Musical Society is pleased to announce its presentation of the Tony Award-winning musical “CHICAGO” (High School Edition), with book by Bob Fosse and Fred Ebb, and music by John Kander and lyrics by Fred Ebb.

“CHICAGO” is the story of two murderesses who find themselves locked up in the Cook County Jail as Roxie Hart (Kaitlyn Diedrich) and Velma Kelly (Abigail Freuhauf) compete for the spotlight on Murderer’s Row. Attorney Billy Flynn (Zach Scime) presents a witty look into the justice system and the celebrity culture of the 1920s. Roxie’s ever-supportive, yet equally dim-witted husband, Amos Hart (Justin Simmons), initially provides an alibi and then the cash for her defense.

While in jail, Roxie and Velma find themselves amongst several equally ‘non-guilty’ prison residents. These women are the charge of the Matron, Mama Morton (Shayla Hill) who demands favors for her ‘favors.’ This lively story of intrigue and mystery is narrated by seniors Andrew Keyser and Kaitlyn Kowalski.

Tickets will be available on the Springville-Griffith Institute Central School District website, springvillegi.org, beginning Feb. 28 and performances will be held in the Lyle G. Palmer Auditorium at 7:30 p.m. on March 11 and 12 and at 2 p.m. on March 13.