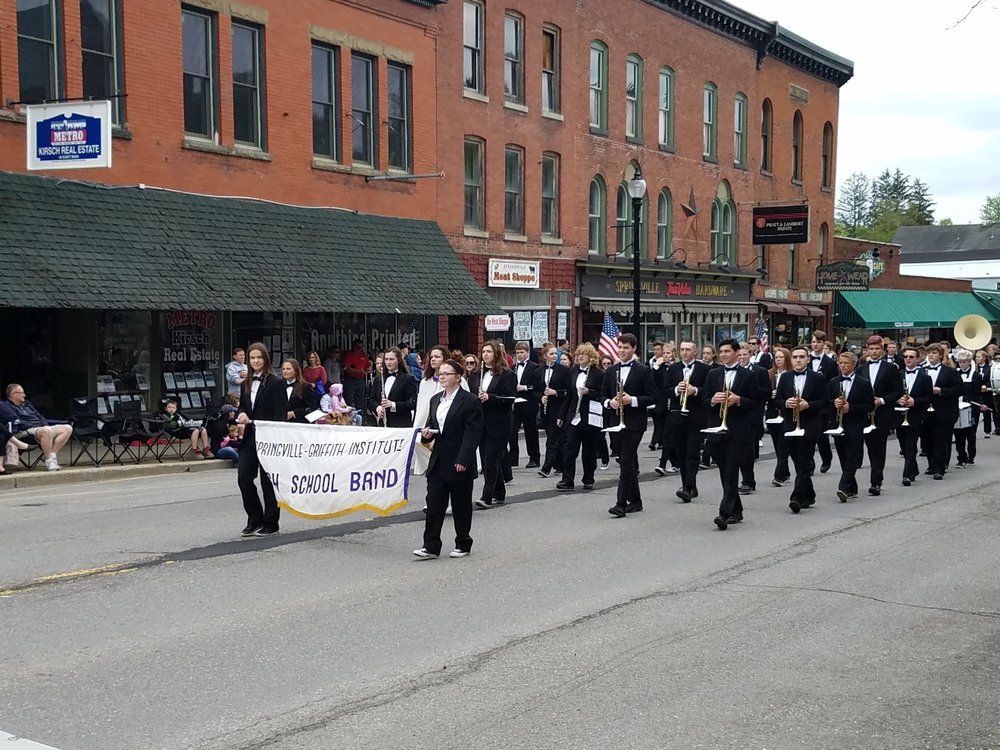 SGI Pageant of Bands Marches Into Springville May 20-21

SPRINGVILLE – An annual tradition is set for May 20 and 21.

Each participating marching band is judged on both marching technique and musicianship over a 300 foot reviewing section of Franklin Street. This year, several bands from various school systems within the regional area will be participating in this 58th Pageant of Bands parade. The finale of the day, the awards ceremony for the Pageant, takes place on the high school’s Pop Warner Field immediately following the parade.

The Springville Pageant of Bands, one of the longest running pageants of its kind in New York State, showcases many of the area’s fine young musicians. The local pageant was started in 1963 by Gerald F. DeLisle, Director of the Springville High School Band from 1960 to 1983.  In 1962, Mr. DeLisle took the G.I. High School Concert and Marching Bands to the Gorham Pageant of Bands in Central New York State. The Springville Concert Band took first place in the concert competition, and Springville was awarded the Grand Achievement Award for the Gorham Pageant. As a result of this accomplishment, Mr. DeLisle immediately made plans to start a similar Band Pageant in Springville.  Since the beginning, the Springville Kiwanis Club – whose motto is “Serving the Children of the World” – has co-sponsored this event with the school, and continues to do so to the present day. Mr. DeLisle remained an active member of the Springville Kiwanis and helped with the Pageant of Bands until he moved from the area in 2005.

Current Springville Band Director Joe Gervase has been the pageant coordinator since 2011.  Mr. Gervase enlists the help of the students in the music department to help coordinate the many varied activities of the pageant. This gives the students an opportunity not available to most high school music students.

“We especially appreciate the year-after-year support of our pageant trophy sponsors – they have provided the needed support to keep the pageant going all these years. Come on out to see the sights and enjoy the sounds of the Springville Pageant of Bands, a true Springville tradition.”